Violinist in the Metro

I often get fun emails of an unknown origin. This is one of them. I checked it out on snopes.com and it is true. You can go there for more details.

Violinist in the Metro— Wash, DC 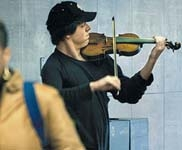 A man sat at a metro station in Washington DC and started to play the violin; it was a cold January morning. He played six Bach pieces for about 45 minutes. During that time, since it was rush hour, it was calculated that thousand of people went through the station, most of them on their way to work.

Three minutes went by and a middle aged man noticed there was musician playing. He slowed his pace and stopped for a few seconds and then hurried up to meet his schedule. A minute later, the violinist received his first dollar tip: a woman threw the money in the till and without stopping continued to walk. A few minutes later, someone leaned against the wall to listen to him, but the man looked at his watch and started to walk again. Clearly he was late for work

The one who paid the most attention was a 3 year old boy. His mother tagged him along, hurried but the kid stopped to look at the violinist. Finally the mother pushed hard and the child continued to walk turning his head all the time. This action was repeated by several other children. All the parents, without exception, forced them to move on.

In the 45 minutes the musician played, only 6 people stopped and stayed for a while. About 20 gave him money but continued to walk their normal pace. He collected $32. When he finished playing and silence took over, no one noticed it. No one applauded, nor was there any recognition.

No one knew this but the violinist was Joshua Bell, one of the best musicians in the world. He played one of the most intricate pieces ever written with a violin worth 3.5 million dollars.

Two days before his playing in the subway, Joshua Bell sold out at a theater in Boston and the seats average $100.

This is a real story. Joshua Bell playing incognito in the metro station was organized by the Washington Post as part of an social experiment about perception, taste and priorities of people. The outlines were: in a commonplace environment at an inappropriate hour: Do we perceive beauty? Do we stop to appreciate it? Do we recognize the talent in an unexpected context?

I guess one of the reasons I liked this email was I LIKE BEAUTIFUL MUSIC. Beautiful music to me is any music that causes my spirit to celebrate the wonders of earth, heaven, life or the soul. It doesn’t matter if it is a child who can’t carry a tune or a father who can’t really sing, an orchestra or band full of children who are just learning to play, or the average middle aged person giving music their best efforts – I love music!

An opera singer who lived beneath me used to wake me up very early every morning when she did her vocal warm-ups on the patio. One day I went out on my balcony and joined in her song. I gave it my best operatic effort. Unfortunately it wasn’t appreciated… No Money PLEASE

Anyway, I hope you take the time to appreciate the beauty of music and all the beauty around you.

Who’s on First – the Madoff Debacle

Many years ago, almost before my time – and I’m sixty-two, there was a comedy sketch that became quite famous called “Who’s on First?” It consisted of a funny dialog between a person trying to get information about the location of players in a baseball game and a frustrated person trying to inform the bewildered questioner. Confusion ensued because the questioner didn’t know the players had unusual names like “Who”.

Silly? Totally… even ridiculous! At least I thought so until I watched a Congressional hearing about the Madoff scandal last night. At first I thought the man being grilled was rather cavalier in his responses.  I thought to myself, “Why don’t they nail that incompetent turkey to the wall? After all, he’s the one that heads the agency that is supposed to be watching over the S.E.C. and he has no clue why this whole debacle happened…” Who saw what, why? Why were the many warnings that were received by his agency ignored? Why were the red flags that were apparent to so many invisible to his agency? He had no answers – NONE AT ALL! But, he was going to get to the bottom of it… “Isn’t that what you were supposed to be doing all along? What do we pay your for?” I thought.

Then, FINALLY, one bewildered congressman tried to set him up for the kill only to find out that they had the wrong guy. It was pathetically funny, in a morbid sort of way, to realize the committee, our Congressmen ‘who get paid to create bureaucracies to protect us’, had no idea who they were questioning or what they did. They actually had not only the wrong guys, but the wrong agency! They were questioning men from the external watchdog rather than the internal watchdog that watches over the watchdog.

So WHO’s ON FIRST – the runner, the first baseman or both??? Actually the correct answer is probably no one.

I went to the grocery store and spent $87.50. The cashier told me I saved $6.75… You would have thought I had just made a deposit. Did she forget to thank me for spending money or did she think she was working in a bank?

I got an advertisement from an insurance company in the mail. The only BOLD ALL CAP TEXT in the advertisement told me that I could get a “FREE QUOTE” if I called a phone number. I’m not sure if they were going to tell me how much it would cost me to buy insurance, or if it was a poetry hot-line.

I passed an apartment complex on the way to the store. They had lots of colored flags out front and a humongous “Now Leasing” banner hanging on their building. I wonder what they did for the last thirty years they were in business… manufacture flags???

At least the apartment industry doesn’t disguise itself in camouflage. Have you ever wondered what ADP, USANA, BRG, or BILCO do? Rhino and Stallion are not in the animal business. Would you have guessed they are locksmiths? Rhino also sells flooring.

Perhaps the insurance company would get more business if they hung out a banner that read, “Now Selling Insurance.” Surely it would be more effective than FREE QUOTE.

I’ve been thinking about developing another stream of income in 2009 ~ perhaps I could start a consulting firm. I could advise businesses to advertise what they do and to be sure to charge their potential customers to find out the price… no more FREE QUOTES!

Or, perhaps I could become a consumer consultant and teach potential customers how to start a bidding war… AT&T said they would charge me $89.95. “Hi AT&T, I have a quote from Comcast for $63.95… What? You say I can have it for $55.00. Great! Would you put that in writing?”

I think that 2009 ought to be dubbed “The Year for Honest Advertising!” and we should all demand that businesses, especially BIG BUSINESSES, tells us exactly what they do and how much it will cost us. Then, if we decide to do business with them, we should demand a “thank you!”

To make this idea a success, I think we should all get together and target one big business to set a precedent. Let’s start with CONGRESS!!! It could be our New Year’s Resolution.